When snow is bad

The October snowstorm clearly overloaded the forest before it was ready. The resulting damage disrupted human life for weeks afterward as many people waited for electric power to be restored.

The snow that falls now is just as useless, piling up on unfrozen ground to insulate it from freezing deeply to support the snow we hope to get when winter actually arrives.

When I came to New Hampshire in 1987,  the locals I met felt that winter arriving on Thanksgiving was normal. Since I had come to enjoy winter, I was ready to give all of December to snow season. But in 1987, the weather had been cold for at least a few weeks. The ground was frozen. The snow might as well fall, because everything certainly looked and felt like winter.

With the shift in climate, the ground sometimes does not freeze deeply all winter. If we get these early, heavy snowstorms they keep the earth warm enough to harbor flowing water and eat away the snow cover from beneath. What looks like an early ski season is just a treacherous plod. The snow sticks to everything. Later, when the sun arcs higher in March, the warmth from above meets the warmth from below to eat away the snow pack.

We make the best of it because we have no choice.
Posted by cafiend at 7:39 AM No comments: Links to this post 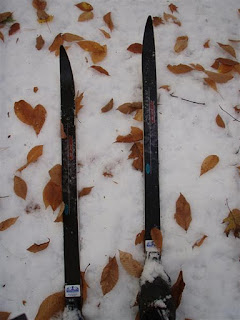 Eight inches of snow fell here in Effingham on Saturday night, October 29. On Sunday morning the sun hit the wet, clumpy mess. It didn't look like it would be any fun at all. I tried to ignore it and hoped it would go away, except for the three-ton berm I shoveled out of the mouth of the driveway where the plow had blocked it. I knew I had to get rid of that before it set up during the cold night to come.

Monday's sun melted some more of the ground cover, but an amazing amount remained. We didn't get anything like the dumping some towns got, with more than 20 inches in some places. I'm just as glad, since the ground has not frozen and the leaves are still on about half the trees.

This morning the coverage was holding up too well to ignore any longer. I wasn't going to get a bike ride. I might as well seize the novelty and go out on skis. I used my trusty Trak Edge traditional-length skis with a partial edge. They were Trak's clone of the Karhu Kodiak from the early 1990s. For boots and bindings I have Asolo Snowpine 75 mm boots and Rottefella Super Tele bindings.

The surface was still slightly crunchy when I set out. In places it was actually almost fast. These were actually some of the better ungroomed conditions I've been on in the past couple of years. A lot of our snow storms have been warm and sticky even in the real season. The timing of freeze and thaw has not been very convenient for me even when the weather has gotten cold enough to freeze wet glop solid. So I had a surprisingly good time. It wasn't time to lay down a bunch of turns through the trees, but it was a sporty shuffle in places.

The skis I used have served me well for this sort of skiing, whether I go for a half-hour or most of a day. The industry has promoted a different approach, but I've seen glimmers that the simple, durable touring ski is not dead. Madshus has one or two models. I haven't poked around to see what else might be out there. And 75 mm staged a bit of a comeback a few years ago after almost drowning in the tide of system bindings pushed by Rottefella and its allies, and by Salomon. In its thick-soled back country version it provides the best control of a heavier ski with the simplest, most durable binding. It would feel like trudging toil on a good groomed trail, but the ski setup for a good groomed trail would feel like a flimsy toy in rough, ungroomed conditions.

That being said, there's no guarantee that 75 mm will be around next year or the year after that. If someone figures out how to get people to dump money into Nordic the way they do into Alpine, the race will be on to get all the cheap-ass bark-eaters to update all their gear. But I guess that's true of any industrialized activity.

In the past decade I have seen a lot of furrowed brows out on the trails as people try to work with the mutating winter conditions in the northeast United States. Even in the mythic old days winter could take some odd twists in this region. Now it's downright wacky. It makes a mess of any regular training system. Now it's even reaching out to cramp the end of bike commuting more than the typical heavy flurries or sleet might have done. It pays to be creative and versatile. Unfortunately not everyone can bend their routines to accommodate the whims of weather. That's what keeps various kinds of indoor fitness center in business. I just don't have that kind of discipline or sociability.
Posted by cafiend at 3:12 PM No comments: Links to this post