Jennifer Caldwell finished a long, courageous battle with cancer on December 27. A link to her obituary is here:

Her funeral is tomorrow at St. Katharine Drexel church in Alton. NH. It's hard to believe she's gone. It's also hard to decide what to wear. Traditional funeral garb is black, but if anyone was about being alive it was Jennifer. Bright colors would seem as apt a tribute to someone who lived fully every moment she could.

Jennifer married Wolfeboro native Howie Bean in 1988. They had a daughter, Anya, in 1989. I seem to recall that she and Howie paddled to a winning time in the Smith River Canoe Race in May that year and Anya was born in July.

I moved to the Wolfeboro area in May 1988. As I found a place in the biking and skiing community I started to hear about Howie and Jennifer. They could often be seen training on the trails, roads and lakes, skiing in winter and running, roller skiing, biking and canoeing in the other seasons. Their ferocious training exploits were legendary. Both were on the US Cross Country Ski team and had numerous victories and podium finishes. Jennifer was the daughter of the man credited with almost single-handedly launching the cross-country ski boom in this country. Even with such a strong competitive focus they could still respect the challenge of a long bike commute. I appreciate that.

Jen brought the determination of a champion into her battle with cancer. We were all fortunate that her tenacity and a few medical advancements coincided to grant us more years with her than we thought we might get when she was first diagnosed. It still was too short.

While she was known as an athlete of the highest caliber, she was more than that and managed to be a nice person at the same time. I barely knew her and have that impression. Looking at the massive amount of love and support that surrounded her from people who knew her better you can tell that it was not superficial.
Posted by cafiend at 11:32 AM No comments: Links to this post 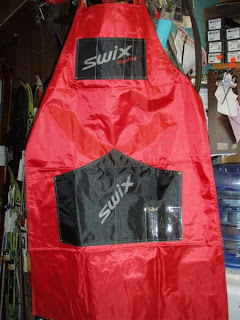 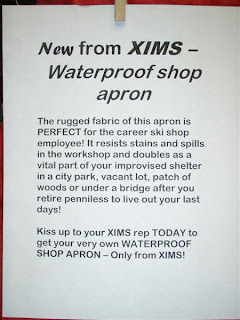 The new apron from XIMS is made of stiff, coated fabric that would make a sturdy expedition pack or bomb-proof tent floor. Since most of us who have worked too long as shop drones have only homelessness to look forward to once we're too old to be of the slightest use in outdoor retail, the introduction of this product is quite timely. Baby Boomers are aging rapidly and many of us failed to score good pension benefits. Since Social Security and Medicare are unnecessary burdens on the taxpayers and it's too late for us to make huge gains in private investment, population reduction will at last be accomplished through hypothermia, malnutrition, violence and disease.

I suppose those of us with fond memories of camping trips and perhaps some leftover equipment might fare a little better in the fiscally conservative, Live and Let Die future. If we can poach some small game or arrange to scavenge in the trash cans of our financial superiors the life could provide a certain gritty comfort.

Along with the health insurance companies we wish ourselves a quick and relatively painless final illness when the time comes.
Posted by cafiend at 2:52 PM No comments: Links to this post