Ski the New England Back Country 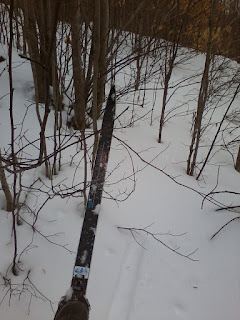 Good thing, too, because there sure aren't any. 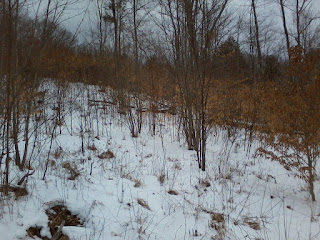 Looking for an alternate route to the higher or farther slopes that have not been logged, I slithered through sapling hell along a contour that used to offer easy passage to beech glades and a drainage system full of short but interesting lines. I am in no shape to ski them, especially on such thin snow that sudden stops are likely, but I wanted to see what people had been up to over there. People are the major destructive force obliterating natural playgrounds.

You can't let your heart be broken by what happens on land other people control. Human destructiveness races against human enlightenment to see what sort of future our species will have. Timber harvesting is a temporary inconvenience that can shut down a fun zone for months, reopen it in a new form for a couple of years, and then really shut it down for more than a decade. Some of the thickets I was pushing through today are almost 20 years old. So much was cut that the new growth is all the same age and all vigorously competing for sunlight.

The oldest cuts offer a few looser passageways. I don't know how much has to do with sapling attrition and how much is because the soil and slope did not favor the kind of dense growth that makes bushwhacking laughable. I crossed the stream at a lower point than I did yesterday, nearly face-planting into a pool as I did so. It would not have been worth it without someone to take video of me doing it, so y'all didn't miss anything. I was just as happy to stay dry.

The new growth favors small animals. I saw lots of snowshoe bunny tracks, as well as small rodents -- field mice, squirrels. Deer have made their paths as well. These are not always passable by humans or aimed where humans feel like going at the moment. 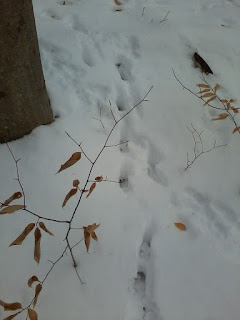 At this junction we see the tracks of deer, snowshoe bunny and some cat named Bob. Farther up I saw Bob's tracks and the bunny's accelerating on converging courses. No sign indicated that Bob had scored.

There was also this beech tree with a clump of grass growing out of it about 10 feet up. 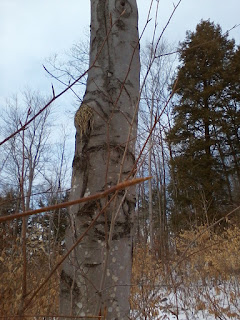 With the leaves off, I could see the islands of old growth above the tops of the small stuff blocking me. Thus I could connect the gaps and thinner bits to wend my way to where surviving tall trees retained the open understory we used to enjoy across the entire mountain.

These islands are very small. But eventually I made it to uncut beech. 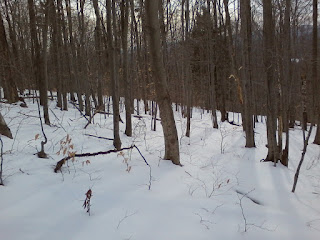 I have a lot of patience with trivia. This mountain used to reward me with so many lines that I would have trouble picking one when I went out for a quickie. Now it draws on my other interest, bushwhacking uphill and finding a way down that won't dislocate my knee when I snag the undergrowth.

Approaching the drainage I remembered from years back, I crossed a skidder road aiming pretty straight up the hill. I scanned anxiously for signs that there had been more than just logging. The snow was undisturbed. Good. No ATVs or snow machines. No truck tracks. No new structures.

We called the drainage The Bowl, but it wasn't really a bowl. It is a system of converging ravines. You can cut shallow lines down the sides of them or aim deeper and steeper. Today I did not even go to the edge. I still had to make my way back through the defenses to get back to my own woods.

The skidder road invited a few turns. I traversed out into the open woods to keep the speed down. I can't afford to get injured, even if I did call for help. Still, I can't resist a little twisting where there's room.

Yesterday I had established a route down. Today I wanted to get back over to it, so I had stayed close to that contour as I explored. Reversing course, I got back to the escape route and worked my way down along a similar route as yesterday's. I skipped the slash patch where I'd gone down abruptly. It was only funny once.

Now on with the day's routine chores before the work week resumes.

Posted by cafiend at 2:55 PM 2 comments: Links to this post

Email ThisBlogThis!Share to TwitterShare to FacebookShare to Pinterest
Labels: backyard back country, BC Play, New England Back Country

While the Middle Atlantic region tunnels its way out after the weekend's blizzard, up here in New Hampshire we're subsisting on a thin benediction preserved by cold -- but hardly frigid -- temperatures.

The sun rises higher every day, making beautiful, clear days an increasing threat to our livelihoods. Today I felt my skis clump and drag in sunny areas even though the sun has to reach from the southern hemisphere to do it. Our little layer of sufficiency won't stand up to much of that.

New England teaches you to live in the moment and grab whatever chance you get. With a day off and no new snow in the forecast, today was my first and best chance to go ski around the mountainside out back.

Deer winter in my yard. My yard is their yard. I laid my tracks over theirs.

Beyond my property line, saplings have grown into an impenetrable mass where loggers cleared the old growth beginning at the end of the 1990s. All the clearings are choked now, even the later ones. The route I used to follow is blocked. This forces me to swing over onto a neighbor's land, which has been a lot less fun since they built a big house on a plateau, replacing a small cabin in a hollow. They never minded letting locals play on their land, but I felt better when I knew no one would see my tracks, let alone catch sight of me from the windows of their chateau.

The house is admirably concealed, but awkwardly placed. It guards part of a stand of hemlock and hardwood that offered numerous descent lines.

I nipped a little clandestine path along the banks of the stream that enters my property, so I could ascend in cover. I did not want to hack it out wide enough to use for descending on skis, because I would not welcome anyone doing such a thing on the land under my protection. Part of my unwritten pact has been that I would only ever use existing natural lines when trespassing. I do my best to leave no trace, because I don't like finding other people's traces on my land. I don't close it off, but I do feel protective. Nipping the narrow trail allows me to climb relatively invisibly to get above the regrowth and into the mature forest at higher elevations. It is so minimally enhanced that I had trouble finding it as I got into the upper end of it.

Ascending takes a lot longer than it used to. Before the logging began, a skier had only to find a good climbing angle and then work it among fairly well grown trees. Sections of sapling growth were small and mostly avoidable. I could traverse shallowly up and left to a drainage offering many runs of turns. From the top of that drainage it was a fairly short zigzag to the summit of the ridge. From that summit I could come down so many different ways that it was hard to choose one. Now it's such a hassle to get past the regrowth that I hardly ever go to the summit anymore. And that's if I bother to go up very far at all.

Today I needed the exercise and the conditions were excellent, at least until the sun put the brakes on things in a few spots. 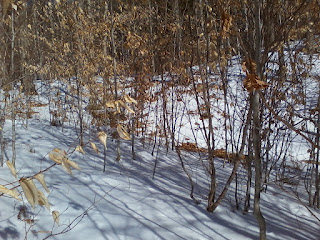 The nice thing about dense sapling growth like this is that only a weirdo would be out there trying to bushwhack through it. My chances of having of to share the playground are slim to none. 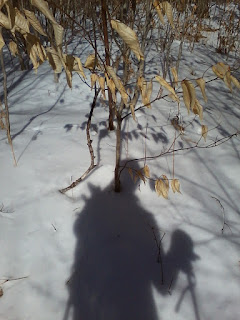 Weirdo
I have never broken the habit of using long, narrow skis. They can do a lot of tricks if you have the patience for it. 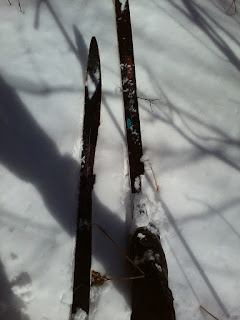 Leather boots, too. I got one of the last resole jobs Carl Limmer did before he had to quit. Maybe if I was a real hard-driving thrasher I would have destroyed my equipment long ago and gotten thrown onto the endless conveyor belt of modernization. The gear I have gets me where I want to go. My pleasure is exploring, not shopping.

After about 45 minutes of route-finding in the pecker poles, including crossing a small stream without getting my skis wet,  I looked across an old-growth section of glade, thinking about descent lines. 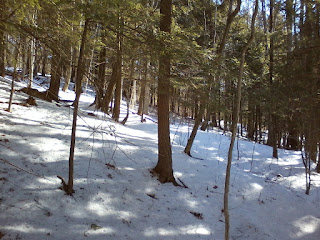 Old growth is a relative term. Around here, if the trees are more than four feet apart it's a spacious glade.

Little things enticed me higher in that glade. I came within sight of the neighbors' chateau and skinnied along the edge of the passable area to look up and decide whether I felt like going farther.

I don't go for summits, although I have nothing against them. Looking up at the blue-black sky, altitude enhanced by my polarized sunglasses, I listened to the wind, and two ravens croaking to each other. That seemed like enough for an old fart on his first ski outing of the season. I still had to get myself down on thin snow over rough ground. That did prove amusing.

Snow conditions ranged from crusty and fast under the hemlocks to powdery and swift, to sun-warmed and grabby. The best way to control speed is not to get it in the first place. But you can't steer a turn if you aren't moving fast enough to bend your skis.

I had one hilarious digger in an area with slash and stumps under the snow. I'd come around fine in the turn, but shanked some branch stub and got thrown into a somersault. These things are funny as long as you get up and everything still works. I actually lay there for a minute or two, enjoying the sun and the repose.

I was solidly on the neighbors' land, which made me a little uncomfortable, but on the other side of the rock wall -- a different neighbor's land -- saplings choked the passage. As soon as I got to my own property corner I zigged through a gap in the wall.

Back on home turf I skied the perimeter, down one property line and up along the stream just inside the other line. 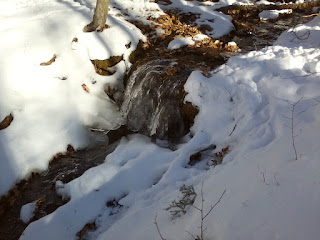 The waterfall is glassed over. 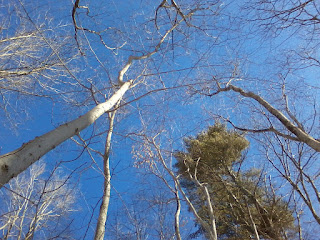 The obligatory up-tree shot on a sunny winter day.

The sun hops over to the south and west a lot more slowly than it did in late December, but still pretty quickly. Winter seems long. Life seems short.

Posted by cafiend at 3:21 PM No comments: Links to this post