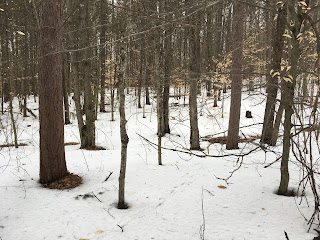 Out for a slither on the slush today, before the temperature hits the 60s tomorrow, I crisscrossed the woods behind my house to try to get something of a workout without having to bushwhack up through the saplings. The snow is melting fast, but it's dense enough to support a skier over the forest litter and some of the fallen branches and trees.

Snow in general provides a pathway and absolution for the innocuously trespassing bushwhacker. While I barely ventured beyond my borders today, I have navigated on the snow for miles over the mountain range when time and conditions allowed it. Almost none of that is ever on a trail of any kind. Even when my ski outing is centered on a trail, I'll look to the forest on either side if I need to pick a better line to climb or descend.

Today's goal was to fold as much distance as I could into the 13 acres at my disposal. I tacked roughly from property line to property line across the lot, working my way gradually toward the back line.

The slope faces south. Any part of it tilted up has already baked brown. And tomorrow the remains will disappear with a nearly audible sizzle.
Posted by cafiend at 4:17 PM No comments: Links to this post

Weird winter weather puts a bewildering variety of stuff on the ground. In the new normal, frozen stuff piles up for a while and then fully or mostly melts away before more is delivered.

Skis and snowshoes evolved to serve similar purposes. Both will support a person on or near the top of snow that would be exhausting to stomp through in bare boots. This applies to soft snow about six inches deep or deeper, given a relatively smooth surface underneath. If the ground is rough and rocky, the snow has to be deep enough to fill in the irregularities. On a rough trail, a nice, deep snowpack creates a better travel surface than the chunky ground.

Skis allow a person to slide, even on an inch or two of snow over a smooth enough surface. Smooth enough might be a manicured trail or a well-packed layer of leaves in mature hardwood forest. You know it when you see it. You wouldn't want to rip any fast downhills on snow that thin, but you can cover ground nicely on flat to rolling terrain, compared to trudging in boots.

Icy conditions favor the modern snowshoe with built-in traction teeth on the bottom. Some people suggest wearing those even when the snow is very shallow, just for the crampon. Or, if the trail is solidly icy, you may do better with any of the various forms of mini-crampons, such as Microspikes. Descendants of army surplus ice creepers, devices like that provide grip when a full crampon would be overkill. As with every other piece of modern gear, you can end up with a few different items to serve the whole spectrum of ice hardness and thickness. Or not.

Given some snow depth, the choice comes down to skis versus snowshoes for flotation and mobility.

After the early visit from the polar air mass this winter, conditions have moderated to springlike, alternating with less drastic freezes. Precipitation has varied from snow to rain. Right around here, nine inches of snow from a recent storm remained powdery for a couple of days before rain and sleet thickened it up.

Yesterday I went out for a little spring skiing in February. Sections on the mountain behind my house have been logged at different times, the oldest being about 20 years ago now. Hard to believe, looking at the sapling hell that hems me in, that those pecker poles are 20 years old. Underachieving little bastards are still about the thickness of a fat broomstick, and stuffed in next to each other on what used to be fun terrain for practicing different ski techniques. Some have died, still standing. As I identify them, I snap them off to open spaces. It's not my land, so I'm not going to whack a real trail. A nip here and there, just to skinny through, doesn't make a space I'd like to ski down through.

Snowshoes might seem like a more logical choice in tight confines, but snowshoes have width. And when I do get to some open space, I want to slide, not plod. To me, snowshoes were always something you used when you had to, not because you preferred to. Weight on your feet is more fatiguing than weight on your pack. Skis have weight, too, but because they are designed to slide in contact with the snow, you aren't picking them up and putting them down the way you have to do with the non-sliding snowshoes. In soft, deep snow, you can shuffle in the snowshoes at times, especially descending, but you still don't get the return on your investment that you get with skis.

Skis slide. That is their strength and their drawback. Aimed down a hill, the skis will go until you stop them, whereas the snowshoes will generally stay stopped until you make them go. Aiming up a hill, skis will slide backwards more readily than snowshoes. You have to feel out the snow to figure out how steeply you can climb with the skis. Climbing skins enhance grip, but you may not have them. My old ones fell apart, and I have not gotten new ones yet. On the climb I have to pick my way through vegetation, accounting for the firmness of the snow, and slope angle.

Bushwhacking in the winter is better than in the summer, because I don't worry as much about disease-ridden ticks getting rubbed all over me by the tangle of saplings and undergrowth. With the leaves off, I can also see farther to plot a route. Beech trees hold some leaves, and evergreens are ever green, so I can't see for a really long way at the best of times, but it's still not the jungle of summer.

The deer have churned up the leaves in places as they forage and bed down. Snow depth varies depending on sun exposure and tree cover. Skinny skis can slither through a narrow space on a strip of snow, traversing a slope that would be treacherous on snowshoes, because of rocky outcroppings. The skiing is hardly a lyrical flow, but progress is steady. I like to stop and look around anyway, so stopping to assess the next obstacle is not a hardship.

My choices might be different if I frequented trails. I have snowshoes, and I don't mind using them when they're the best tool for the situation. Learn to use both. It's all fun.
Posted by cafiend at 10:27 AM No comments: Links to this post